One of the advantages of living in Florida in election season is that the Romneys and the Obamas are always coming around, trying to woo everyone into voting for them!

This is because Florida is a swing state (George W Bush won it by just 543 votes in 2000!) and has a very varied population, even for the United States.  In Florida you’ll find Cuban exiles, retired Jewish Americans, Mexican immigrants, traditional "cracker" types, African Americans, Scientologists, and there are even some British expats, I’ve heard!  It’s like a US Noah’s Ark, with two of every type of American (and others) crammed into a hot, steamy, swampy flat peninsula.  Okay, maybe I am going too far now.  But you get the message.

The bottom line is that the first lady, Michelle Obama came to town this Monday and my wife managed to get some tickets for us to go and see her talk at a rally!

It was all rather exciting and took a bit of organizing, as my wife had to leave work early, and we had a tennis practice straight after.  A further annoying complication was that it was a very popular event and so we couldn’t find anywhere to park on the day within a mile of the university venue.

Eventually, after driving around for about twenty five minutes and getting more and more desperate, we managed to find a metered parking space that allowed us 2 hours grace in return for a wallet full of dimes and quarters.

Consequently, we arrived at the venue later than we’d planned.  After negotiating the airport-style security, we gained entrance - but having arrived late, we were shunted into seats at the rear end of the indoor stadium.  It meant that for the most part we were viewing Michelle from the rear and had to view the big screens to see her face when she spoke.

But she is a good speaker with charisma, who projects and induces a lot of warmth.  Her talk wasn’t so much about trying to convert the unconvinced, but more of a rallying cry to the troops.  Michelle has wide appeal, but she is also a particular heroine of African-American womanhood and they were out in force.

After the talk, we headed back to the car.  We were well within the 2 hour parking period and feeling rather buoyed up by the talk until we reached the car and discovered that we had a parking citation stuffed under the windscreen wiper.  We’d been booked for facing the car against the stream of traffic, a petty offence for sure, and ordered to pay a 30 dollar fine!

Trying not to let it spoil our evening, we tried to forget the fine and went to practice our tennis.  It wasn’t until we arrived home that I switched on my computer and discovered the news about the secretly recorded video of Mitt Romney, where at a private fundraiser, he seemed to imply that 47% of Americans were dependent on government handouts and that they would vote for Barak Obama regardless of what Mitt said or did, so Mitt didn’t care about them.

The Romney scandal seemed big.  It was like he’d self-destructed.  It almost felt like the election was over before it had even really begun.
Posted by Paul at 11:43 AM 3 comments:

The GOP and Democratic National Conventions


This is my first presidential election since I moved to the US.  I have followed previous ones from the UK, but in some ways the perspective is a little different being here.  I generally voted for the Lib Dems (Centrist) or the Labour party (Centre-left) back in the UK, so my sympathies tend towards the Democrats here, but I will try to be as objective as I can (which is impossible, I know!).

I think it’s fair to say that neither of the main candidates is super-popular with their own party.  For many Democrats, Obama has been a big disappointment after all the hope and optimism generated during his 2008 campaign.  For the Republicans, Romney is essentially a compromise candidate, the least offensive option for the various factions that make up the GOP, and one that few in the party particularly seem to love.

The general atmosphere of the political campaigns is less positive than 2008.  Their approach seems to reflect the above, in some ways, with each candidate putting forward a message to the voters, which often seems to imply: “You think I’m bad?  Take a look at the other guy!” 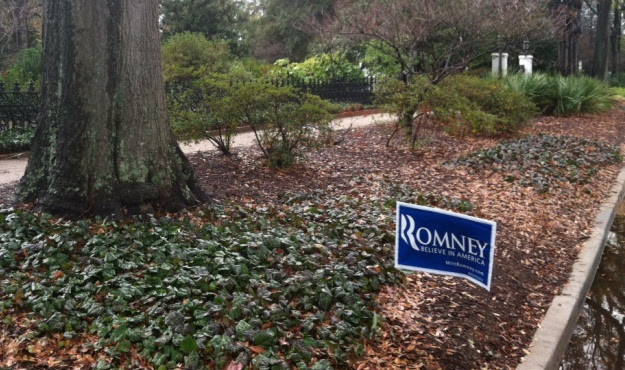 The most memorable parts of the two conventions

This will probably seem shallow to some, but the thing that I will probably remember most about the Republican convention was the Clint Eastwood speech, where he addressed an empty chair, with the conceit being that an imaginary Obama was sitting in it.  Although the idea may not have appeared to be a bad one on paper, the reality of Eastwood’s speech delivered a level of absurdity that wouldn’t have seemed out of place in a Monty Python sketch.  It was a gift to American satirists too, of course.

The actual serious political speeches at the RNC were on the whole, very competent, but the atmosphere generally seemed a little flat, probably for the reasons I outlined earlier – Romney is respected but not loved by his party.

The most memorable thing about the Democratic convention for me was the Bill Clinton speech.  It was gripping, and quite simply a master class in political oration - Clinton has without doubt, a slippery and sleazy side to his character, but wow, what a speaker!

The downside to the Bill Clinton speech, of course, was that it reminded you what a genius Clinton was and is, when it comes to the Dark Arts of political strategy, tactics and delivery, and by implication, what a mediocre figure that Obama can seem in comparison sometimes.

One thing that made a big impact on me was the very different make-up of the audiences at the two conventions.  I have to say that the RNC crowd seemed to be drawn from a narrower demographic – they were older, whiter, and more male generally, whereas the DNC audience appeared younger and much more diverse in their makeup and backgrounds.  (One could say something similar about the Conservative and Labour conference audiences in the UK, of course, but in the US, the difference seemed much starker).

The other thing that seemed a little odd was that apart from Condoleezza Rice, there seemed to be no representatives of the last Republican government at the RNC.

The most memorable problem for the Democrats, of course, was the messy turnaround over them not including “God” and “Jerusalem” in their platform, which caught the media and then public attention.

I must admit that for an old cynic like me, political conferences can often fall a little short of the mark.  I almost always find myself wanting less gloss and more substance.  Before the party conventions, I naively hoped that I might find out a little more about what Obama and Romney might actually do if they won the presidency - there was lots of rhetoric, but precious little in terms of practical policies coming from either of them.

One background factor that can also be somewhat disconcerting is the overall atmosphere of rancor and acrimony that possesses US politics at the moment.  Modern British politics can often be somewhat dull and flat (certainly since the turmoil of the 1980s), because the three main UK parties tend to squabble over the same piece of centre ground nowadays (things seem to have heated up a little in the UK with the austerity cuts and a fracturing coalition government, but it still seems mild compared to the situation across the Atlantic).  In the US, however, the Republicans and Democrats are polar opposites politically and passions can sometimes spill over into a real sense of sourness.

Having said all that, one refreshing thing about US politicians is their willingness to roll up their sleeves and get down and with ‘the people’.  British politicians can sometimes appear stiff and aloof by comparison.  The US presidential elections are also unique and special to Americans as it’s the only election they have where the entire nation participates.  There is no real equivalent in a constitutional monarchy/parliamentary democracy like the UK, where the head of state is hereditary and the political leader is chosen by their own political party.
Posted by Paul at 10:39 AM 5 comments: