The big news here in Gainesville, Florida is that in the aftermath of Tropical Storm Debby, we’ve been hit by a mosquito plague and I am covered in uncomfortable and itchy bites.  They kept me awake for most of one night, such was the discomfort.

The reason for the mosquito plague is the massive amount of water that Tropical Storm Debby rained down on us not long ago.  Mosquitoes like standing water as a venue for their egg laying.  Even if it’s dry, the mosquito eggs can sit around for months, then spring into life when the rain comes.

By the way, for the linguists out there, the shortened name for mosquitoes in England tends to be “mozzies”, but in the USA they are more commonly referred to as “skeeters”.

Anyway, I am bitten to hell.

A range of cures and reliefs have been offered to me for mozzie bites, ranging from dabbing the bites with gin, to tea tree oil.  The alcoholic cure maybe sounds the slightly more appealing, but I am using Cortizone

I am spraying myself with “Off!

”, when I go out, a DEET spray, which the skeeters don’t like (at least in theory!). 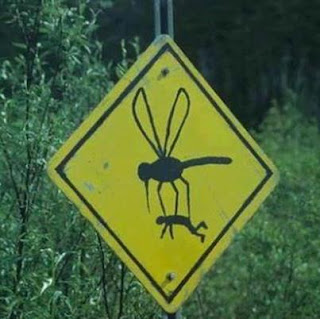 The mosquitoes are worst in the morning and at sunset.  Unfortunately, at the end of the last week, when I put the trash/rubbish out, the cat decided to make a dash for freedom and explore the neighbourhood.  Pets aren’t supposed to roam around where we live, so normally the cat spends its time shut inside, or out on the (mosquito-netted) porch.  Anyway, I went after the cat and eventually managed to retrieve it, but got bitten about a zillion times in the process.

We have mosquitoes in the UK, but there aren’t a lot of them.  There are midges up in Scotland which are maybe just as bad, or worse in some respects, although they don’t give you any tropical diseases!
Posted by Paul at 1:51 PM 9 comments: