Everybody knows that Brits drive on the left hand side of the road and everybody else drives on the right.  Let’s get that one out of the way before we even start.  Having said that, not a lot of Americans know that there are many major countries where they also drive on the left, places like, urm, Nepal, Trinidad and Tobago.  Okay, I admit it, driving on the left is just plain strange.  But regardless, I intend to continue my theme of British and American differences with a blog post about driving in the Land of the Free (aka the USA), specifically, driving in Florida. 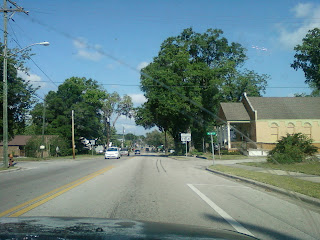 Disappointingly, apart from some old people, certain black people, and a few weirdos, nobody drives those enormous American cars that the world became familiar with in tv programmes such as “Starsky and Hutch”, “The Dukes of Hazzard” and “Dallas”, which, if you were a Briton born in the mid sixties like myself, were your main source of information about American culture.  Americans generally drive pretty similar cars to the Europeans nowadays (many Japanese models especially), which is kind of a let down.  I suspect that one reason is because the American car industry rivaled the British one in terms of producing poor quality vehicles, so most of their cars were in reality more crap than classic, and they fell apart years ago.  Plus those American cars needed 10 gallons of fuel just to get started and travel to the end of the driveway, which isn’t much use in the modern world.
Despite all the similarities however, there are a several areas where there are British and American differences, certainly here in Florida.  For one thing, Americans are particularly fond of their trucks.  Especially their pick ups.  Big open backed things.  I am not convinced that all their owners need them for work purposes, they seem to be as much an expression of manhood and lifestyle, but you will see many of them on the roads.
Americans are fond of their bumper stickers too, which indicate everything from religious and political affiliations, to places where the car owner likes to eat, their favourite sports teams, and sometimes just jokes or plain silliness.
To be a true Floridian, however, you need to forget four wheels altogether and buy a motorcycle, preferably a Harley with chopper handlebars and a dropped seat.  As you’re not legally obliged to wear a helmet down here, you might as well just dispense with long trousers too, and a jacket – heck, I saw a guy riding a motorcycle the other day who wasn’t even wearing shoes!  He was barefoot, in his shorts and cut-off t-shirt, cruising beside us on two wheels, indifferent to all the skin and brains that he might lose should he be unlucky enough to be parted from his machine while in motion.
I am still waiting for my first sighting of a start naked motorcycle rider, it is probably only a matter of time…
(ps If you like this British expat in the USA blog and you are a facebooker, please consider going to its new facebook page and clicking the ‘like button’.  Ta.)
Posted by Paul at 5:36 PM 9 comments:

Americans don’t wear knickers.  They just have underwear.  And they wear their pants over their underwear, which kind of makes sense.  Except that I am British.  So underwear, knickers, and pants are all essentially the same thing.  Although having said that, knickers are normally female in the , whereas underwear and pants can be for either sex.

Yes, I am getting my knickers in a twist over the differences between American and British English again!

British pants were not always underpants.  When I was a child the word “pants” was normally used to refer to any sort of long trousers, the same way that the Americans use the word.  It didn’t matter what they were made of, denim, tweed, or cotton, as long as they started at your waist and covered your ankles, they were pants.  Then, during the 1990s, something rather strange happened.  Suddenly British people started using the word “pants” to mean underpants.  If you used the word in the old sense, to mean any type of long trousers, people would snigger at you, as if you were committing some enormous “faux pas”, when all you were actually doing was using the same word that everyone had always used in the past.

My brother lived in during the 90s and returned home to to find that people were giggling when he talked about his pants.  I have the opposite problem to my brother.  I have to keep reminding myself that when Americans refer to their pants, they are not discussing their knickers.

I guess this sort of thing has happened before.  I mean, I remember my grandmother referring to my footwear as “stockings” instead of “socks” when I was a child.  I have no idea when the sock/stocking change happened but it clearly took place during my grandmother’s lifetime, but before mine.

As Americans don’t use the word, “knickers”, I’ll leave you with some of its uses, other than meaning an item of underwear.

2.  It can also mean, “Oh sod it!” and you can say “Knickers to that!” when you are fed up with continuing something.

British pests and pests are very different beasts, yet curiously they also share some similarities, so let us see how they shape up if we put them head to head.  This will be a 3 bout contest with no biting or gouging, let the best critter win!
Foxes vs Raccoons
In , if a dustbin (trash can) gets rifled, the number one suspect is usually an urban fox (unless you are unfortunate enough to live in a seaside town like , where giant seagulls fight over the pizza crusts).  The fox is a resourceful animal with a legendary reputation gained from numerous fairytales, although in reality he is just a little dog with a big tail.  In , the raccoon is the chief trash can raider.  With a reputation for possessing cunning and even supernatural powers by Native Americans, he sports a stripy tail and bandit mask eye markings, which seem somehow appropriate given his thieving tendencies.
Winner: the fox.  He is more clever, cooler and sexier, and that’s why we have the term: “foxy”.  I mean nobody ever says an attractive lady is “raccoony”, do they?
Hedgehogs vs Armadillos
These foragers would appear to be completely worlds apart on the surface, but they do have one similarity that I’ll tell you about, once I’ve introduced them.  In the , we have the hedgehog, the cute spiky mammal, who really wouldn’t be a pest at all, if he wasn’t a walking breeding colony of fleas and lice.  Having said that, the hedgehog does probably eat many more bugs than he carries around.  , on the other hand,  has the armadillo, this fellow comes out at night when you’re asleep and f**ks up all your flower beds, digging around for grubs and making lots of messy holes in the process.  So what do they have in common?  They are both virtually suicidal when it comes to crossing the road and hence can commonly be found flattened by the side of the highway.
Winner: the armadillo.  Hedgehogs are cute but their spines are no match for the armadillo’s folds of leathery armor.
﻿﻿﻿﻿﻿﻿﻿﻿﻿﻿﻿
Slugs vs Cockroaches
﻿﻿﻿﻿﻿﻿﻿﻿
﻿﻿﻿﻿﻿﻿Slugs just love the damp climate (somebody’s got to!).  Their favorite pastime is munching holes in people’s lettuces and leaving slimy silver trails everywhere they go.  The only way to kill them without using heavy duty chemicals is to put out saucers of beer.  The slugs drink the beer, fall into the saucer and drown.  (The same technique would probably work with some of my friends, if you could find a big enough saucer!)  Florida Cockroaches, on the other hand, prefer a diet of meat and cake, but will slum it if they need to.  They thrive in the sub-tropical Florida heat and fight a constant war of attrition with mankind, their main weapons being excessive breeding and hiding in dark corners.
﻿﻿﻿﻿
Winner: the cockroaches.  They can beat pretty much anything with their sheer resilience.  I never used to believe what people said about them being capable of surviving a nuclear war, but the other day I discovered one that had crept into the microwave oven when I wasn’t looking.  After being blasted with microwaves for over ten minutes, the little blighter came out of there looking even more lively than ever, it was like the microwaves had actually invigorated him!  I swear that he was even doing a little dance right up to the moment that I crushed him with a paper towel.
Result
I declare pests to be the overall victors!
Posted by Paul at 8:58 AM 12 comments:

Okay, this is just for fun, so nobody get upset or anything, here are my 3 big British and American differences (funny):

1.  Us Brits love to moan.  If it is raining, we moan because it is too wet.  If the sun comes out, we moan because it is too hot.  In short, we carp about everything.  We don’t expect any solutions, we just like to whine on about how crap everything is.  Moan in the presence an American, however, and they will immediately attempt to find a solution to the perceived problem.  In the can-do, optimistic culture of the , problems are there to be solved.  They really don’t grasp that in the , complaining for the sake of it is accepted as a subtle art form and the idea of all our troubles being solved actually slightly horrifies us.

2.  Customer service is highly developed in the , but almost non-existent in the , where supermarket checkout assistants will usually only smile at Christmas time and adopt miserable expressions for the rest of the year.   Although it is great to have such a friendly and attentive service in the US, American customers do take advantage sometimes (at least by British standards) especially in restaurants where they sometimes request so many changes to the dish that’s being offered on the menu, you do wonder whether it’s worth having a menu at all?  I mean if you ask for a chicken dish without the chicken, or that the chef substitutes blue cheese for bacon, it does kind of make it into a completely different meal, doesn’t it?  If you did that in the , they’d probably tell you to eff off!
3.  Brits love to swear, or “cuss” as they call it in the .  It is tough for a Brit to utter an entire paragraph without at least one f-word in it.  Women, children and older people will all participate, given half a chance.  Swearwords/cuss words are treated more seriously in the and censored from most TV programmes, this means that watching Gordon Ramsay in the is just a series of bleeping sounds.  Sex is another thing that Americans are generally uptight about (though not so much down here in where everyone walks around half naked).  As Brits, we are used to being castigated for our “sexual repression” by our more adventureful neighbours, the French and Dutch, but over here in the , Brit culture seems relatively liberated.  Americans are much more tolerant of violence and guns however and you are free to watch people being shot to death on TV at any time of night or day.  Unless the gunman or victim happens to be making love or uttering an f-word at the time of the shooting, in which case the scene will be censored.
Posted by Paul at 5:30 PM 13 comments: