I had an interesting and varied Memorial Day weekend.  I am a big fan of jazz and have managed to find another aficionado who lives in Orlando, so we decided that we would meet up at the Jacksonville Jazz Festival, which is in the northeast of Florida, along with our wives, who are also online buddies.

There was some discussion over which day we should meet – should it be Friday (Sonny Rollins headlining) or Sunday (Chick Corea)?  Saturday was out of the question as I had my final tennis match of the season (see below).  Anyway, we eventually settled for a Friday meet up.

The Jacksonville event is actually one of the biggest jazz festivals in the US.  It takes place outdoors and the events are free.  The city is actually pretty attractive with the centre blocked off to motor traffic (unlike in Europe where pedestrians have gradually gained the upper hand, US city centres still seem generally to be very much dominated by cars).

The following day (Saturday) my tennis team played our final round of matches of the Spring league.  It was calculated that we only needed to win one out of the three final contests to win the league on points.  Alas, despite two of the contests being decided by tie-breakers (including my own), we lost all three and so had to settle for second place.  So we won’t be going to the special USTA tournament weekend at Daytona Beach now, it seems!

After all the excitement of Friday and Saturday, Sunday and Monday ended up being relatively quiet days for us, as Tropical Storm Beryl swept in and dumped bucketfuls of rain across northeast Florida (the deluge is still going on as I write).

The final day of the Jacksonville Jazz Festival had to be cancelled because of the weather – so choosing Friday to meet up now seems like it was a very good decision.
Posted by Paul at 11:19 AM 2 comments:

For over a year the only armadillos in Florida I’ve seen have been squashed flat on the road.  I know that they are around because they leave holes in our ‘yard’ (that’s back garden in UK speak) where they regularly root around overnight.

Then last week, our neighbour across the way, ‘Stoner Santa’ (his real name is Jim, but we call him Stoner Santa because he’s an aging hippy with white hair, big beard and a pot belly) caught an armadillo in a bucket.  He told me that he was going to release it into the wild but showed me it first.  They are funny little creatures.  I was disappointed afterwards that I’d not had the opportunity to take a photo, as I didn’t have my camera or even my cell phone (that’s a ‘mobile’ in the UK) with me.

But as luck would have it, this weekend my wife and I came across four young armadillos rooting around just a few feet from us in some local woods.  I was able to take both photos and (woohoo!) some video footage (see below).

The armadillos weren’t my only wildlife first either.  The hot Summer sun seems to bring all the ‘critters’ (UK = animals) out into the open and a couple of days ago I had to take a detour to avoid a rattlesnake in the road.  They are fatter than your average snake and have a more dangerous bite.  It was just around the corner from our place.  I wanted to go back and take a snap (I had my camera with me this time) but a redneck family in a truck got there first and were poking the snake around.  I decided to continue on my way.

Away from wildlife, I have been continuing with my tennis.  The team I play for are close to winning our local league – we just needed to win 3 out of our final 5 matches.  2 of the matches were played on Monday.

One of them was our team captain, Scott, playing singles. 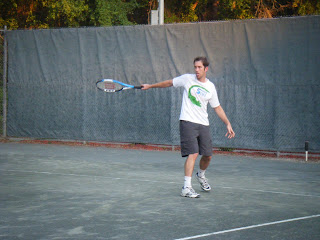 The other was Erik and Clay playing doubles. 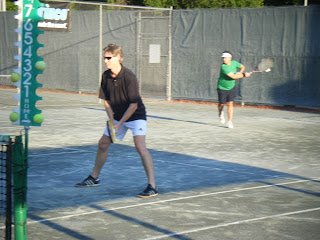 Unfortunately, we lost both matches(!)

That means that we now need to win all 3 of our final matches on Saturday.  Wish me luck, as I am playing doubles that day for the team!
Posted by Paul at 8:02 AM 5 comments:

US beer vs UK beer

I like to believe that I deal with all the weighty cultural issues in this British expat blog and what could be of more import than the relative merits of British and American beer?

The first thing that I would say is that the almost universally negative image of American beer that exists in Britain (and Europe too for that matter) is certainly too simplistic.  (The negative image is summed up by the old Monty Python joke: “American beer is a little like making love in a canoe.  It's f**king close to water.”)

The problem for American beer is that the only brands that you tend to see in the UK are the awful ones like Miller Lite and Budweiser (Anheuser-Busch).  These really are bland, watery beers.  Like in the UK, however, the better American beers tend to come from the smaller, local breweries, rather than the leviathans.  (To some extent, the US has similar problems with beer as the UK did in the 60s and 70s with aggressive major breweries [with crap beer] trying to muscle out the smaller and medium-sized breweries [with good beer] with the intention of creating local monopolies.)

Because of the localized nature of brewing and the size of the US, plus my own admittedly limited experience, it would actually be ridiculous for me to even attempt to give a comprehensive major overview, so instead I will just settle for giving my personal experiences of living in north-central Florida.

My favorite (big brewery) US beers that I drink regularly here in North Central Florida: 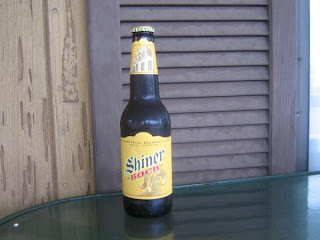 Shiner – brewed in Austin, Texas is easily my favourite that I've found.  It has a strong and distinctive taste.  When I used to visit Florida, I couldn’t believe how dirt cheap it was in the store.  By the time I’d moved here, however, they’d bumped up the price!  They only sell Shiner in certain US states and luckily Florida is one of them - I was disappointed to find that I couldn’t get hold of it up in New York.

Sam Adams produce reasonable beer and I enjoy some of their selection packs - some of these beers can be a little gimmicky but it’s fun to try them.

Yuengling is for me just on the right side of the line between the watery American beers and the good ones in my opinion.  I will drink it sometimes, however, because it’s often cheaper(!)

Most British/Irish beers are relatively specialist in the US in my (limited) experience.  The most commonly available ones in the bars and stores where I am are Newcastle Brown Ale and Harp, which seems a little bizarre to me, as these drinks were common in the UK back in the 70s and 80s but have largely waned in popularity.

The best British beer, the real ales, aren’t really available in draught form, which is a pity, but no surprise.  You can get a limited but reasonable range in the bottled section – although the US tends to put everything into small (approx 300ml?) bottles, which still irritates me a little.  I still find it strange seeing a US miniature, differently shaped version of the iconic Newcastle Brown Ale bottle and there is something sacrilegious about seeing hefeweissen sold in bottles below 500ml in size (although you can buy the ‘proper’ German 500ml bottles in the specialist stores!)  ;-)

European beers are also fairly widely available in the US in my experience and I drink a lot of Becks Dark, Warsteiner, and Heineken here.  I have also found a couple of outlets locally that sell my all time favourite (more specialist) European beers, which tend to be from Germany*, Belgium, and Central Europe.  German hefeweissen will always be one of my favourite tipples.

Cider isn’t a beer, of course, but it’s drunk in a similar way, so I thought that I would give it a mention.  I actually love cider as a refreshing alternative to beer and having cheap, available cider is something that I miss here in the US, especially when you’re on a limited budget (cider is often the cheap drunk’s tipple in the UK!).

From what I gather, cider wasn’t particularly common in the US (compared to the UK) until relatively recently.  Now it’s easier to get hold of, but the ciders tend to be the big Irish brands that are advertised to be drunk over ice, such as Magners.  American ciders often seem to be sweeter and relatively weak, compared to the stronger and drier British ones, in my experience.

Scrumpy style cider is pretty specialist in the US, although it’s difficult to imagine that it doesn’t exist in a rough form somewhere in the USA?

The good news is that do sell Strongbow on draught in some bars of the bars around here – hurray!

*German bars are quite possibly the best place in the world for drinking draught and bottled beer, in my opinion.  Mainly because they are scrupulous when it comes to storing their beers at the correct temperature.  This is why Germany is generally known to be the best place for drinking draught Guiness methinks (even better than Ireland, ironically).  The sad and slightly strange fact is that in places like the US and Britain, bars will quite often undermine a great beer by storing, or serving it too cold or too warm in my experience.
Posted by Paul at 1:18 PM 19 comments: