After all the drama of flying into North West England at the peak of the floods (see previous), the rest of December was generally pretty quiet for me.

I more or less stayed in the old home town of Kendal for a month.  I grew up and went to school there until I was 18, but now I know virtually nobody there anymore apart from my older relatives.  Pretty much all my old friends and contemporaries have moved away over the years, lured away by colleges or job opportunities.

It’s a little strange, to be honest, I know the streets and buildings so well, and the whole place has large amounts of personal history for me, but I am essentially a stranger here now in many respects.

I did manage to track down a couple of old friends whilst in Kendal, however, who had been away and come back.  I got to chew the fat and catch up with the news about people from school that I’d lost touch with for thirty years or so, which was great! 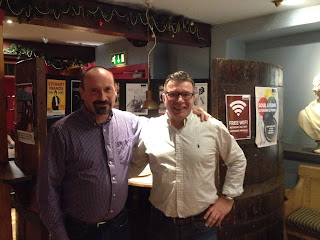 I had a fairly quiet Christmas and New Year period with the family.  The furthest I traveled was a couple of trips into the Lake District.

January was a complete contrast to Deceber, as I started some of my English/European traveling in earnest.

First on the list was a trip down to the South Coast to see my brother and his family in the Brighton/Lewes area.  The South of England has a different feel and culture to the North, for such a small place England manages to have a host of accents, dialects, geography, and cultures.

It was great to see my young nephew.  He’s currently losing his baby teeth and getting his adult ones
.

I also managed to Squeeze in a  day trip to London.  I visited the National Portrait Gallery (mind-blowing!), The National Gallery and the Tate Modern.  As well as a couple of super old pubs on Fleet Street.


My second journey was to Leeds, a city I lived in (or thereabouts) for about twenty years.  I met up with friends for a curry and then drinks in the pub.  You don’t really get snow in Florida, so I always hope for a little when I visit colder climes.  Amazingly it snowed that very night, making the meet-up all a little extra magical.

Towards the end of January I flew to Hamburg, Germany for a few days.  I was getting a bit blasé about traveling by this point so didn’t do a lot of preparation.  Consequently I arrived in the evening with just a crap map that I’d printed off the internet and it took me some time to find the right train and then walk to my friends from the station.

Hamburg was excellent.  My favourite part was the evening spent in the Reeperbahn district with an old German friend, seeing some of the old Beatles haunts, the famous redlight area, and the lively dive bars that never sleep.  Hamburg has definitely joined my (long and growing) list of favourite cities.


It was a great month with some unforgettable traveling but by the end I felt a little worn out and a rest was in order.  If anything, I knew that February was likely to be just as busy, if not more so!

So I laid low at my parents’ house for ten days or so.

I had Liverpool, Chester, Cornwall, London, Lewes, and at least one trip into the Lake District on the schedule for February.
Posted by Paul at 10:13 AM 4 comments:

It's the same holiday and the same festive season, but there are differences in the experience according to which country you are in.

Below is a list of the main things that I've noticed:


Finally, one tradition that you won't find in the U.S. is the pulling of Christmas crackers, which is done in the U.K. usually during the festive dinner. The cracker is pulled by two people, one at each end, it makes a crack/bang, and then the central cardboard chamber is ripped open to reveal a small present or puzzle, a festive paper hat in the shape of a crown, and a written joke that is traditionally read out to the other guests.
Posted by Paul at 8:58 AM 1 comment:

Back in the UK: Culture Shock!

So I am back in the UK for a few months, after spending a week in New York en route from Florida.
I also managed to get caught up in the Storm Desmond drama when I eventually arrived back in the North of England (more on that later.)

I had a great time in New York, staying with my old friend Ed at East Northport, near Huntington, on the north coast of Long Island.


I arrived on a Saturday morning and we had a quiet day eating, drinking, and catching up on people and events since the last time I was in New York, seven years ago.

We went into Manhattan the following day and did poetry readings in the city and then Brooklyn, which as fun.

I had some great time exploring Long Island with Ed, and met up with my old friend, Lorraine, who showed me around the last time I was in New York, as well as hosting a poetry event in Valley Stream.


I also went into the city on my own and visited the Natural History Museum and the Museum of Modern Art, I loved the dinosaurs and there was a Jackson Pollock exhibition.

It's difficult to cover everything during my action-packed week in New York and all the folks I met, but it was wonderful.

All good things come to an end, however, and the time came for me to journey to my next destination, dear old Blighty.  I was travelling to the northwest of England, Kendal, Cumbria, to be exact.

Due to heavy traffic, I arrived late for my flight check-in at JFK.  The lady at the desk saw that as personal insult, and was consequently a cow, but I survived (she made me jump through numerous extra hoops just to show her displeasure).

The subsequent flight to Iceland went pretty smoothly, however.  I was impressed by all the improvements they've made to Reykjavik airport.  It used to look like an old (I think it is a former hangar), now it's like something from an IKEA catalogue.

My flight from Reykjavik to the UK was delayed by 45 mins but nothing remarkable otherwise.

I arrived in Manchester the following morning feeling tired and hungry, but pretty good.  Then I found out that due to Storm Desmond and the intense flooding in the North West of England, there were no trains running north of Preston, Lancashire.  It was a similar story with the coach/bus service.

The storm had flooded out whole areas of some towns, including Kendal, knocked out the power, damaged bridges, roads, and caused mini-landslides.  I was stranded just one and a half hours from my destination.

The options for me were to stay in a hotel in Manchester or Preston; stay with a friend in the area; or get a ride home by car from Preston.

After talking to my parents, I caught the train to Preston.  The station cafe bar was full of stranded people: families; mountaineers; students; businessmen; old people, young people, and others.  I consoled myself with a couple of quality pints of draught dry cider (a relative rarity in the US).

In the end, I was lucky enough to get a lift from my parents from Preston to Kendal, but the journey took twice as long as normal, thanks to the flooded roads.

A few things I've needed to adjust to since arriving back, both good and bad: